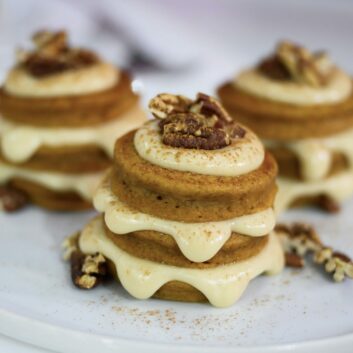 It’s hard to resist the scrumptious scent of freshly baked cinnamon buns. Sweet news: I’ve figured out a clever way to prepare them using nutrient-packed ingredients and minimal sugar. Now you can whip up a batch and enjoy the cinnamon-y goodness whenever you get a craving. We all call these “Cinnayums” in my house—one taste and you’ll see why. For a shortcut, instead of making the pancake batter from scratch, use any box pancake mix and simply add a dollop of pumpkin purée, brown sugar, and ground cinnamon.

TO MAKE THE “BUNS:” Whisk together the flours, baking soda, salt, and cinnamon in a large bowl until well combined. Set aside.

In a second large mixing bowl, whip the egg whites until blended. Add the pumpkin, yogurt, brown sugar, and vanilla, and whisk until combined.

Pour the wet ingredients over the dry ingredients and stir gently until just combined and smooth (no dry streaks should remain), taking care not to overmix. If time allows, let the batter rest for 10 minutes. If the batter feels too thick, mix in a splash of milk.

Liberally coat a large skillet or griddle with nonstick oil spray and warm over medium heat. When the pan is nice and hot, ladle about 1 tablespoon of batter onto the skillet to form a mini pancake, making a total of about 24 mini pancakes. (Alternatively, you can make 16 slightly larger pancakes and create two layers during assembly instead of three). The batter is thick, so it’s okay if the tops are puffy. Cook until the bottom of each mini pancake is golden brown, about 2 minutes. Flip the pancakes and push down with the back of a spatula to flatten them out like traditional small flapjacks. Cook until the other side is golden brown, another 2 minutes.

Recoat the skillet with nonstick oil spray periodically to prevent the pancakes from sticking.

TO MAKE THE ICING: In a small food processor (or by hand mixing), blend together the cream cheese and maple syrup until smooth.

To serve, spread about 1 teaspoon icing on a mini pancake, and then top with another pancake. Spread 1 teaspoon of icing on top of the second pancake before adding a last pancake on top. Finally, spread about 2 teaspoons of icing on the top and garnish with 1 teaspoon chopped and toasted pecans and a sprinkling of cinnamon, if desired.